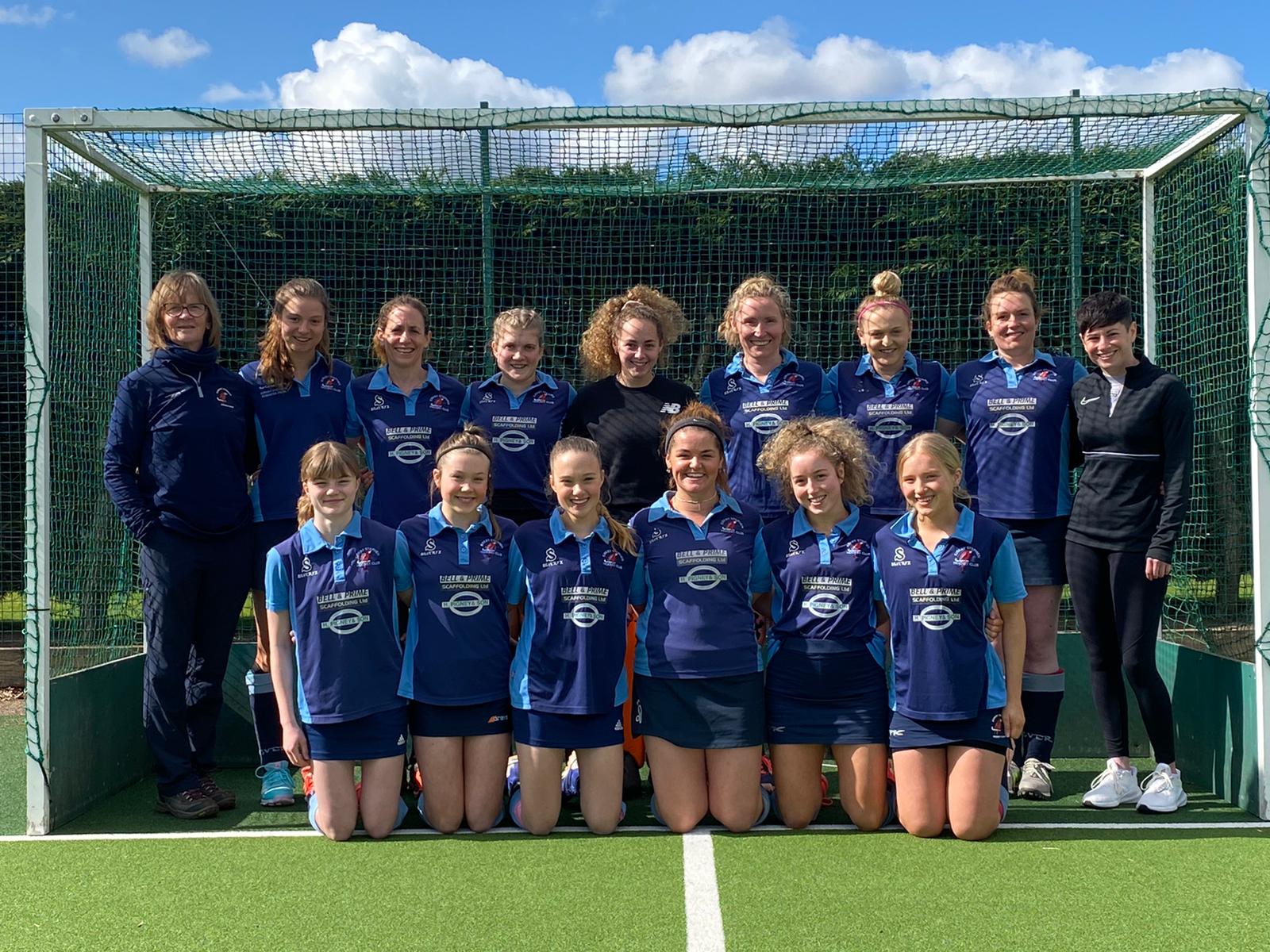 Kirkby Stephen Ladies 1s went into their last game of the season with nothing to lose but it all to play for. The fight at the top of top of the North West Premier League was even grabbing attention from England Hockey with Kirkby lurking in 3rd position, a win against the top of the table Liverpool Sefton would mean taking the promotion place, and 2nd place Bowdon would need a high scoring win to take 1st place.

“It is incredibly tight at the top of the North West Women’s Premier Division, with just one round of games remaining this Saturday. Liverpool Sefton and Bowdon 2 are level on 49 points, but Kirkby Stephen are lurking in third on 46 points – and they host Sefton this weekend. That game takes place at 1pm, and if Sefton win they would go three points clear with a goal difference better than Bowdon’s by at least +5. Bowdon would then need a big win at home to Lancaster in their 3:45pm match. However if Kirkby Stephen win the early match, they would themselves go top, with a goal difference at least +6 better than Bowdon, but Bowdon would then only need a point to take the title.”

All eyes were on the fight between Kirkby and Sefton at Kirkby Stephen with a spectacular home crowd cheering the local ladies on. As expected the game starting with high intensity with both teams moving the ball fast but it was Liverpool who took the early lead after a quick break and a great deflection from the opposition.

This pushed the home side to step up to the next gear, and shortly after equalised when Martha Bainbridge won a penalty corner. Anna Pigney injected the ball, but the opposition reacted too quick and had to send a defender to the halfway line. And yet again, with Pigneys injection, the second defender was sent to the halfway line; leaving the keeper & 2 defenders in the goal to defend the next penalty corner. On the 3rd attempt the ball was sent to the top of the D to Heidi Maughan, Maughan slipped the ball to the right, where Anthea Bowman pushed the ball onto the left post and Anna tapped it in over the line, 1-1, the amazing homeside crowd roared!

Kirkby Stephen then lead the game with another short corner, where Tilly Rose injected the ball to the top, and Martha Bainbridge perfectly placed the ball through all the sticks and into the backboard, 2-1. Further encouragement from the sidelines cheering on the home side.

Sefton then felt the serious pressure, as their top of the league title was slowly drifting away from them. They soon stepped up, and pinged the ball into the back of the net from another unstoppable deflection, 2-2. Unfortunately with 5 minutes to go, Sefton confirmed their title with another textbook finish.

Kirkby Stephen had a remarkable game, with every player giving 110%. Starting with Mags Donnelly, Martha Bainbridge and Anna Pigney hassling up front, creating so much space with their lovely runs, and playing some superb balls. Then for the midfield, Anthea Bowman, Tilly Rose, Heidi Maughan, Catherine Ewbank, Rachael Gowing and Nicole Clegg, who all covered so much mileage, running back and forth to pack in the centre structure of the team, finding and creating some amazing set pieces, as well as helping the defenders win the ball off the opposition. Then we reach Sophie and her angels; Goalkeeper Sophie Winder made some remarkable saves, with Sefton shooting at all angles, and defence, Vicki Capstick, Lilia Hutchinson and Jenny Coates, who did not show any fear tackling some fierce shots and movements in attack. And not to forget, Janette McWhirter and Lucy Potter coaching & subbing on the side-line; their support on & off the pitch, positivity and passion shone through the team on the pitch.

Man of the match was awarded to Sophie Winder for her reactions in the net that kept the game so close for the 70 minutes; a perfect way to finish another terrific season for Sophie!

Kirkby Stephen 1st team only just missed promotion into the National League, but what an amazing achievement for the little of Kirkby Stephen to finish 3rd position in the North West Premier League. After some difficult injuries this season, it has been breath-taking to watch the 14 year olds step up to adult hockey with such confidence, skill & stamina. The 1st team’s achievements is reflective on the 2nd & 3rd team, and of course the Mini’s & Junior’s. Thank you to all who have got involved with a successful season of 2021/22, from parents driving their kids to Macclesfield, to players & coaches turning up to the blustery weather at KSGS.

Bring on next year, the future is going to be amazing!!!

Kirkby Stephen Ladies 1s headed over to Lytham St Annes last week, all arriving slightly behind schedule, and therefore having to warm up in minimal time.

Lytham used this to their advantage, and were better team for the first 15mins but Kirkby Stephen defended well and held them off.

Kirkby Stephen’s first goal came against the run of play, the ball was won in midfield, where we broke quickly, with a textbook passing move, Heidi Maughan played a pass to Lucy Potter on the back post, and Potter nurtured the ball over the goal line.

Shortly after half time, Lucy Potter won a penalty corner. Anna Pigney injected the ball out to the top of the D, where Julie Hope struck the ball, Lytham deflected the ball from reaching the goal, but Martha Bainbridge cleaned up by volleying it into the goal. After the celebration of the goal, the girls ran back, where Rachael Gowing excitably ran backwards, stumbled and fell into a snow-angel position… And this began the away sides goal celebration!

Lytham snook a goal in on the left post, after pressing Kirkby Stephen with sheer determination.

The 3rd away goal came from tremendous team work at the back, passing it around and out through to midfield. The ball was then played to Mags Donnelly in the D, who slipped it to Lucy Potter, Lucy passed it across goal to Anna Pigney on back post, where Anna smashed it in the backboard. Julie Hope celebrated, inspired by Rachael.

The 4th goal, Nicole Clegg took a speedy sideline, drove round the back of the defence with her speed, and played it into Martha who was running in on the penalty spot, and Martha slipped it passed the keeper. Anthea Bowman celebrated, inspired by Rachael.

The 5th goal came from when Heidi played a powerball from half way line, breaking the line of the whole of their midfield, Martha picked it up on the reverse fantastically on the top of the D, beat the defender and struck it into the corner, where she gained her hattrick!

The 6th and final goal, also came from midfield, where Nicole gave straight pass to Lucy, Lucy remained composed, defeating the keeper and knocking it into the bottom corner!

Kirkby Stephen Ladies 1s started the day with a thorough & intense warm up in preparation for the fellow unbeaten team in the league.

Deeside Ramblers have not conceded many goals so the home side knew it was going to be hard to break them down to find that goal.

It was a very high intensity game with Kirkby playing some of their best hockey of the season. Kirkby Stephen defended brilliantly as a team, and some great saves made by Sophie Winder, and limited their shots on goal.  Poor Jenny Coates managed to get clipped by one of the Deeside sticks, sporting a swollen lip & bust nose, but with her tough old Cumbrian boots on, Jenny continued with the game like a trooper!  Heidi Maughan managed to receive a card, however not a Christmas one, it was a green card, meaning she was sin binned for 2 mins, due to a crucial stick tackle in the Ramblers counterattack.

Kirkby Stephen pressured the away side with some fast breaks, and some great passes up the pitch to the forwards (Lucy Potter, Anna Pigney and Mags Donnelly) who had some great chances, but unfortunately couldn’t manage to convert anything with Deeside Ramblers keeper keeping the away side making it very difficult to get the ball over the goal line.  In the middle of the park, Nicole Clegg, Heidi Maughan, Julie Hope, Rachael Gowing, Mel Parkin and Anthea Bowman covered some miles on the pitch with a lot of back-and-forth running.  The steel wall of defence, Jessica Harrison, Vicki Capstick and Jenny Coates, intimidated the attack, letting very few past, as always.

Kirkby kept fighting until the end, winning a penalty corner seconds before the full time whistle was blown.  The corner was allowed to be played out, and all the team stepped up to try and find that winning goal, but unfortunately the deflection caught a home foot before reaching the backboard, so it was disallowed.
A tremendous battle to finish the last home game of 2021.  Kirkby Stephen still remain top of the league, with more wins in their bag.  Man of the match was awarded to Mel Parkin & Julie Hope for their superb tackles, distribution of the ball, and giving the team the motivation throughout the game.  Kirkby Stephen face Liverpool Sefton 2nds away Saturday 11th December, another team at the top end of the league.